small siren (2018), is available at The Cultural Society. 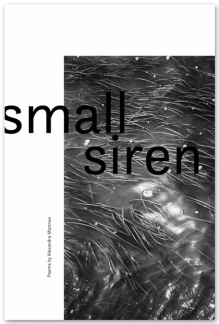 “When good poetry hits, it animates the actual, it becomes the actual. That’s small siren: a serious romp of constructive music that is what it says. Science and nature unlock their mysteries by being precise; in small siren the words — cut, spliced, compressed — form units of attention enacting the physical world so precisely that even the sun and the moon ride their arcs untroubled. Across cities and seas, Alexandra Mattraw’s language isn’t attached to images; it comes out of them, like a birthright. The authenticity is declarative and unmistakable: ‘A sign is a block, an island, a cloud, a clock.’  She makes it real.”

“Though cradled by earth, Mattraw’s poems wander through a new human condition. Or are the songs of spirits who won’t tiptoe around their biographers. Through the unregistered versions of ourselves, we can read these poems and worry about having regular bodies later. Here is a beautiful lesson or wager that on a page you can risk your dreams.”

“In Alexandra Mattraw’s much-awaited first book, small siren, we encounter a poet of extraordinary observation and inquiry. An enchantment and engagement with the world commences: ‘when is a voice a piano,’ ‘repetition needs to believe,’ ‘what grew before you could speak’ build a kind of groundswell where Mattraw puts her ear to the hardscape of 21st century America and its global environs: Sao Paolo, Iceland, New Zealand. Ultimately, notions of country and categories break down. What we find is heresy, hearsay, and yes, wishes. Throughout, what survives is a relationship of love and courage, of errors and triumph. A human relationship of lovers, of family. This is a book of wonder and awe and strength. When the world goes down, I want to be in Alexandra Mattraw’s boat.”

A review at The Adroit Journal

One Reply to “Small Siren”